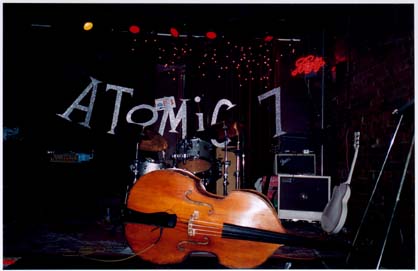 Name all seven members of your band and their role in the band:

Who writes the lyrics?

With your pro-nuclear stance, how will you win over the many Greenpeace-affiliated Boygina fans?

Four of our members have volunteered to miss the show on the 19th to go throw rocks at France.

Will the rockabilly boys and girls who I assume flock to your shows make fun of Boygina's white-on-white fashion sense and our bad hair (except for Shannon, our drummer, who has good hair)?

I checked with both of them and they said they would shake it sassy-style to any band with a righteous, right-on name like Boygina.

How long will Boygina guitarist Terence Dick put up with the heaviness of his guitar amplifier (an amp that used to belong to Atomic 7's Brian Connelly) before he trades it for a smaller, lighter amp?

Terence will never get rid of his Super Reverb amp because it is a super amp… with reverb! Its heaviness will only make Terence stronger. Terence knows he should suffer for his art.

Should amplifiers be bought based on how heavy they are and how strong the guitarist is?

No. No. No. Amplifiers should be purchased strictly on their snazzy names. When they start to market amplifiers with names like "the Ray Liotta" or "the Nicholas Cage," the world will become a better place.

What's it like playing the Gem (that bar on Davenport that I believe Atomic 7 has played at)?

The Gem is the go-go dance capitol of the world! Its staff have been immortalised in such songs as "Artistry In Nachos," "She's Got Haggar Party Slacks," "Ovens Are Important" and "Muskrat Love." You can slowdance to the best jukebox on the planet under the loving, watchful eye of a frosty sno-cone machine which Eddie has left to me in his will.

Isn't Ben from the Gem nice?

Ben? Most people would turn him away… I don't listen to a word they say… they don't see him like I do… I wish they would try to… I'm sure they'd think again… if they had a friend like Ben.

1. The ones that can leap off their seats and can play standing up are real keepers. 2. The Dave Clark Five snare drum roll is a wicked must! 3. They must be able to carry heavy guitar amplifiers.

Explain the importance of:

Kind of like oxygen and coffee for your ears.

Let's say Brylcream is the "Le Chateau" of hair goo. Many of my hardcore friends swear by such products as "Oily Pete's" or "Hey There Exxon Head." If you want some hillbilly flair, why not try some bacon fat or lard?

A note from your Shadowy Webmaster: I'm assuming this is an interview with Brian answering the questions, but the original article didn't make that clear. Sure seems like his kinda answers though.