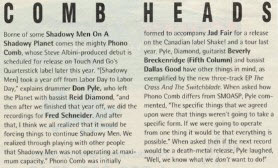 Borne of some Shadowy Men On A Shadowy Planet comes the mighty Phono Comb, whose Steve Albini-produced debut is scheduled for release on Touch And Go's Quarterstick label later this year. "[Shadowy Men] took a year off from Labor Day to Labor Day," explains drummer Don Pyle, who left the Planet with bassist Reid Diamond, "and then after we finished that year off, we did the recordings for Fred Schneider. And after that, I think we all realized that it would be forcing things to continue Shadowy Men. We realized through playing with other people that Shadowy Men was not operating at maximum capacity." Phono Comb was initially formed to accompany Jad Fair for a release on the Canadian label Shake! and a tour last year. Pyle, Diamond, guitarist Beverly Breckenridge (Fifth Column) and bassist Dallas Good have other things in mind, as exemplified by the new three-track EP The Crass And The Switchblade When asked how Phono Comb differs from SMOASP, Pyle commented, "The specific things that we agreed upon were that things were not going to take a specific form. If we were going to operate from one thing it would be that everything is possible." When asked if the next record would be a death-metal release, Pyle laughed, "Well, we know what we don't want to do!"

Notes from the Shadowy Webmaster: