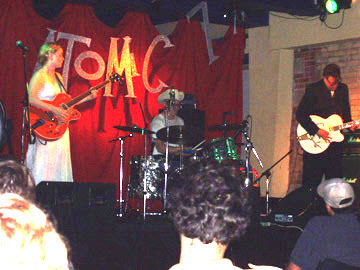 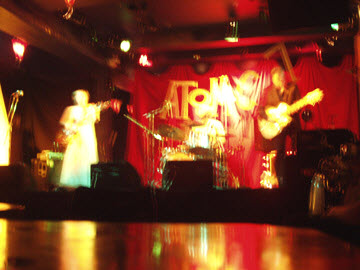 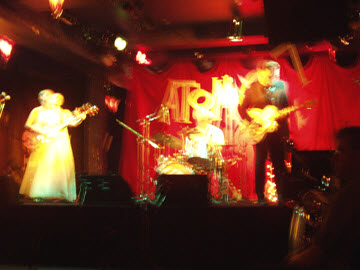 The Fiftymen sing country music. Period. Whether you'd be jaded enough to believe that their cowboy togs and western sneers were illegitimate or otherwise, this Ottawa 5-piece are an incredibly earnest bunch and devoid of the saucy spaghetti western spunk reserved for White Cowbell Oklahoma and the like. As the opening band for another Friday at the Elmo, the Fiftymen proved adept at winning the crowd over by the strength of their songs alone. Lord knows their stage show was unfit to do it alone. Arguably the most notable achievement in this regard was vocalist Jeff Hardill's insistence on single-fisting his beer bottle through the duration of the band's set. No matter since the Fiftymen's brand of outlaw country doesn't require any afforded theatrics - they managed to squeeze bits and pieces of rock and roll into a country framework, with a palm full of reverb acting as the lube. Hardill's vocals definitely borrow pretty heavily from Johnny Cash but at least he looks the part, sporting a pair of broad shoulders and a deadpan glare. The rest of the band followed through effortlessly, showing considerable chops and a high degree of authenticity. Even when some technical glitches bit the Fiftymen in the ass half way through their set, they managed to compensate by firing up their smoke machine and tossing bits of "Dueling Banjos" into the crowd as a pacifier.

Headliner Atomic 7 mined similar western territory but without the bodies or words of their openers. Lead by ex-Shadowy Men On A Shadowy Planet guitarist Brian Connelly, the three-piece were wound tighter than a homespun bed coil and only unfurled long enough to provide a seamless, hour-plus set of their instrumental narratives. Connelly definitely plays one of the most expressive guitars around and in showcasing tunes from the band's newly released … en Hillbilly Caliente, he dug trenches around his bandmates through the versatility of his marksmanship. Bassist Mandi Bird looked the part of a barmaid in a long-flowing lace dress. Yet as she patted along at her tool with a seemingly irksome ambivalence, the wry grins she leaked on more than one occasion were mere indicators of her enjoyment as she bounced her ways through her parts. Likewise, drummer Mike Andriosso sported a ten-gallon hat and pair of clubs and in doing so, proved the perfect fodder for Connelly's plucky tirades. And what plucky tirades they were! As one song bled into another, Connelly's guitar stopped on a dime, slowed down, sped up and everything in between. Good thing too since Atomic 7's music touches on country, rock, punk, lounge and probably a million other styles yet somehow manages to remain entirely unique, all within a finger-length of Connelly's manual dexterity. No witty stage banter, no ironic indie rock BS - just two men, a woman and an obvious reverence to the spirit of rock and roll.