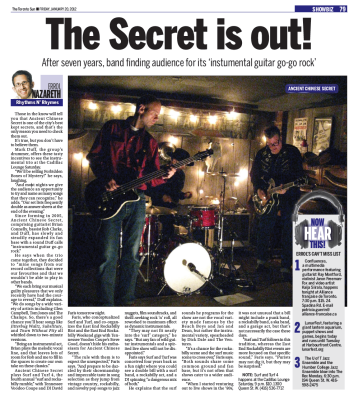 The Secret is out!

Those in the know will tell you that Ancient Chinese Secret is one of the city's best kept secrets, and that's the only reason you need to check them out.

It's true, but you don't have to believe them.

Mark Duff, the group's drummer, offers these tasty incentives to see the instrumental trio at the Cadillac Lounge Saturday.

"We'll be selling Forbidden Boxes of Mystery!" he says, laughing.

"And most nights we give the audience an opportunity to try and name as many songs that they can recognize," he adds. "Our set lists frequently double as answer sheets at the end of the evening."

He says when the trio came together, they decided to "mine songs from our record collections that were our favourites and that we wouldn't be able to play in other bands.

"We each bring our musical guilty pleasures that we only recently have had the courage to reveal," Duff explains.

"We do songs by a wide variety of artists including Glen Campbell, Tom Jones and The Champs. So, there's a good chance you'll hear songs like Jitterbug Waltz, Substitute, and Town Without Pity all whittled down to two-minute versions.

"Being an instrumental act, Brian plays the melodic vocal line, and that leaves lots of room for Rob and me to fill in the spaces to create our own take on these classics."

"The rule with them is to expect the unexpected," Faris says. "And prepare to be dazzled by their showmanship and impeccable taste in song selection as they jump from vintage country, rockabilly, and novelty pop songs to jazz nuggets, film soundtracks, and thrill-seeking rock 'n' roll, all reworked to maximum effect as dynamic instrumentals.

"They may not fit neatly into the 'surf' category," he says. "But any fan of wild guitar instrumentals and a spirited live show will not be disappointed."

Faris says Surf and Turf was conceived four years back as a fun night where you could see a double bill with a surf band, a rockabilly act, and a DJ spinning "a dangerous mix of both."

He explains that the surf sounds he programs for the show are not the vocal variety made famous by the Beach Boys and Jan and Dean, but rather the instrumental variety, spearheaded by Dick Dale and The Ventures.

"It's a chance for the rockabilly scene and the surf music scene to cross over," Faris says. "Both sounds share some common ground and fan base, but it's not often that shows cater to a wider audience.

"When I started venturing out to live shows in the '80s, it was not unusual that a bill might include a punk band, a rockabilly band, a ska band, and a garage act, but that's not necessarily the case these days.

"Surf and Turf follows in this tradition, whereas the East End Rockabilly Riot events are more focused on that specific sound," Faris says. "Purists may not dig it, but they may be surprised."