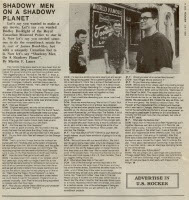 SHADOWY MEN ON A SHADOWY PLANET

This Toronto three-piece seems to have been born for just this purpose. Being unencumbered with a vocalist has helped this group land some significant soundtrack work. Their biggest project is Kids In The Hall TV show, a Canadian comedy troupe. The band has done most of the music on this four-year-old series. They also release records: 10 singles, 2 albums, and their brand new full-length product, Sport Fishin' - The Lure Of The Bait, The Luck Of The Hook.

Martin F. Lance talked to Don Pyle, 'level headed' drummer of Shadowy Men On A Shadowy Planet on June 10, a few days after the band had returned from England after doing a Peel session. The band had been invited by John Peel three years earlier to come over and do a session, and had finally been able to do it.

DON: England was great, we only did two shows in London, in places not much bigger than the Euclid Tavern, but the places were packed and people knew our songs. We had some celebrities in the audience; some members of Heavenly, and some of the members of Gallon Drunk. The guys from Gallon Drunk really liked us and there was talk of doing a tour with them.

M.F.: And how was the Peel Sessions?

DON: It was so quick and easy. We recorded in this big studio that was the last place that Bing Crosby ever recorded at. We just set up and recorded live in the studio.

M.F.: Do you think John Peel will release it on his Strange Fruit label?

DON: That's up to him, it says on the contract we signed with him. He does give us the option of licensing the recordings from him, but it's not cheap, and the guitar amp we rented was on its last legs, so I don't know. The recording engineer said we were only the third Canadian band to play on the Peel Sessions in its 26 year history.

M.F.: How did John Peel get in touch with you?

DON: I've always sent him copies of our singles. About four years ago, along with our single, I sent him a note saying that we were looking for someone to put out an album of all our previous singles. He said that over the air and we got all kinds of letters from people wanting to put out our first album, because he was playing us on the radio. That's how the Savvy Show Stoppers LP came about. Unfortunately, Glass Records went under before we could make it over for the session. England is so repressed musically. John Peel is the only thing equivalent to college radio that they have.

M.F.: How did you choose Steve Albini as your producer for your latest album, Sport Fishin'?

DON: He was at a wedding we were playing at and we got along. We got along great. He's a great engineer, but he's not a nerd about it; I think this is some of the best sounding recordings we've made. "Heck Of A Great Cook", recorded at the Chicago Recording Co., a huge place with a private pool room and platinum records on the wall. Steve's basement studio was not together so they recorded at C.R.C., the home of Styx.

M.F.: I had a hard time describing you, since I can't call you a 'surf' band.

DON: Since we wrote that song "We're Not A Fuckin' Surf Band", I've noticed that a lot of articles have stopped calling us that and other people have been hard pressed to describe us. It's obvious what our influences are but we are more influenced by Link Wray than The Safaris. A lot of people don't see the difference between the two, and we definitely don't sound like The Beach Boys. We are more like spy music than surf music. Some of the younger people, or people who don't have as big a record collection as we do, who come to see us don't recognize some of out other influences, like Alex Harvey or Alice Cooper. We also like The Cramps.

M.F.: Your new album Sport Fishin' is your third full-length release, do you have ambitions of going on to a bigger label?

DON: We could have with our second album. We didn't want to get on some major label, only to be dropped if we didn't sell 500,000 copies. We prefer to be a big fish in a small pond. We are the biggest seller on Cargo Records. I think they treat us a little nicer. We've made friends with some of the people there. This record is the first one for us that has sold more copies in the U.S. than Canada. This is our biggest selling record yet.

M.F.: What about new Kids In The Hall?

DON: One of the first songs were ever recorded is the theme to the show. We write most of the music, and play live at the theater shows. Sometimes we write music to the video, a lot of times they fit the video to our music. Sometimes they will ask us to write music to fit a particular theme, like "Toast And Coffee". New Kids In The Hall keeps us busy 6 months out of the year, which leaves us free to tour the other 6 months. We have also done music for a movie, Mysterious Moon Men Of Canada, and a pilot for a cartoon series. One of the advantages of being an instrumental band is that you get asked to do a lot of soundtrack projects.

M.F.: Would you ever do a James Bond moive?

DON: Not if Roger Moore starred in it!

DON: We've done three videos, each one costing almost twice as much as the last one. We did our first one for $70, our second one for $200, and our third one, "Memories Of Gay Paree" for $400. The reason this one cost so much was that we had to rent a video-editing suite - we used to have friends do that for us. We like doing the videos ourselves. We use Super 8 film. It looks the way we think - out of focus and grainy. We filmed our second video, "Pet Parade" at the International Pop Underground Festival, which was held in Olympia, Washington. The festival was held at the same time as Olympia's annual 'pet parade', so we bought a used Super 8 camera for $15 and filmed it. Actually, the film cost more than the camera; two rolls of film at $17 each.

DON: Kalvin from K Records (and Beat Happening) put it together. Because we have a single on K Records, we were invited to play. It was amazing. All these bands and about 700 people in this small town. It was a five-day event, and happened at three different clubs. You could go see a band at 11 AM and go 'til midnight. After that, there was a disco that was open 'til 6 AM. The last day of the festival was a concert by Fugazi, held in a movie theater. There was a real sense of community - it was like being in summer camp. I saw Ian MacKaye stamping hands at one of the shows.

M.F.: What are your future plans?

DON: We are going to do a split single with a band from Chicago called Moto; they have a great, raw punk kind of sound. It will be a Christmas single. I know that's a long way off, but you have to start early with these kind of things.