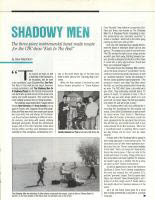 "The reason we work so well is that Kids In The Hall want to be musicians, and we want to be comedians," says Shadowy Man, Don Pyle. The Kids In The Hall are the latest television comedy sensations, and Shadowy Men On A Shadowy Planet are the Toronto instrumental rock band who provide music for the show's live taping and credit sequence. This could be the most unlikely success story in show business.

The shadowy saga begins when Calgary school friends Reid Diamond and Brian Connelly met up again in Toronto with Calgarian Bruce McCulloch. Brian and Reid were fresh from avant-punk bands like Crash Kills Five and Martyrs At The Barbecue. Bruce had been dabbling in different comedic ventures, and along with several similarly deranged youngsters, formed the effervescent troupe, Kids In The Hall. Early Kids shows were low-key affairs, but they soon developed some notoriety for their outrageous, contemporary comedy, to the point where two of the Kids were hired to write skits for the "Saturday Night Live" series.

When the Kids needed a live band for their factory theatre production of "Grave Robbers From Hipsville," they called compatriots Don, Reid and Brian, now known as Shadowy Men On A Shadowy Planet. According to Don, this performance-pop spectacle launched "a series of mishaps" which led to the entire gang earning a prime-time slot on the CBC.

Don says the Shadowy Guys quickly discovered the world of television wasn't all fun and games. "The lawyers came in and took over. The CBC wanted the rights to our songs, and we wouldn't give them away. Battling between lawyers actually overlapped production of the show. It turned into a fairly ugly business. Thank God there are competent lawyers!"

The actual music the Shadowy Men contribute to the show consists of "sound bites" for the credit and commercial break sequences, as well as "audience warmers" during set-changes in the live, studio audience taping segments. "The producers weren't sure what they liked about the Kids' act, and they certainly didn't know who we were. The CBC didn't have a clue what we'd give them. They eventually received about 75 pieces of music, 12 seconds or less. It fits in with the way we write songs, which is to just record all our basic ideas, the bits and pieces. One clever riff, and we've got a song."

The Shadowy Men have also participated in the recording of the soundtrack for the popular cult movie, Comic Book Confidential as well as work for Genie-winner Colin Breton's "Mysterious Moon-Men Of Canada," a title which couldn't be more appropriate for the zany band. Don stresses that all this big- and small-screen stuff is just extracurricular fun for the musicians. "We're not a 'soundtrack band' or anything. We're a band; we play shows, we do tours, and we make records."

A major part of the Shadowy Men's appeal is their rowdy approach to instrumental tunes. The total word-count of the entire repertoire numbers less than ten. There's never been balladry in this band. "Since our songs don't have words, they're like mood pieces. Titles can refer to the mood and texture of a song. Things come out of the conversations we have together. For instance, we couldn't agree on a 'Zombie' title for a song, we came up with 'Zombie Compromise.'"

As well as appearing on two of the notorious Og Music It Came From Canada compilations, the band has released four self-pressed E.P.s, and two "giveaway" singles. Their European label, Glass, has released Savvy Show Stoppers, comprised of all their single and E.P. tracks, while a full-length album for Canadian release is in the works.

All in all, the future looks good for a band who initially seems like a bad joke in a foreign language.